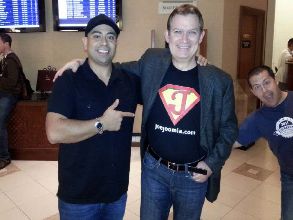 I did some really dumb things at the first Joomla! World Conference in San Jose, California. But what’s a big event without memorable stories?

First though, this was an excellent conference attended by an International audience of developers, integrators, and users. The speakers were impressive. I was really excited about going to this conference. Many of the people behind the latest innovations in Joomla! were there in person. I felt like a kid on my way to a candy store with a credit card. This was going to be a great weekend.

The venue was eBay’s Town Hall in San Jose, California. Some of the top Joomla! talent is employed at eBay. It’s an inspiring place to meet. It’s going to take a long time to watch the videos of all the sessions I didn’t get to go to in person.

These are talented people who work hard and play hard

Throughout the weekend there was all kinds of networking, working on code together, and lots of socializing. A real community spirit of co-operation and fun was evident at this event. Joomlers know how to have a good time. Even for those who have too much of a good time someone is always there to help out. One such developer, who will remain nameless, was helped to his room and tucked safely into bed for the night by a friend who rescued him after he was found bouncing off the walls trying to get around. “Pinball” is my new nickname for him.

My session was fun and it went well 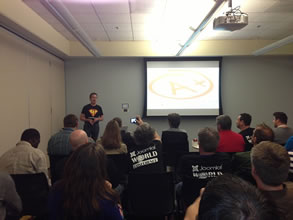 This was the third time I have given a presentation at a large Joomla! event. My session was titled Secrets of Getting an A+ Joomla! Reputation and Attracting A+ Clients. Afterwards and throughout the rest of the weekend people told me how much they enjoyed it and what they got out of it. I am grateful for the feedback because it shows there is a need for this kind of information, especially for those trying to grow their Joomla! businesses.

Talks like this may be the best way that I can personally give back to the community.

Here are three really dumb things I did during this event

So how did I mess up? Let me count the ways… It’s been said that things happen in groups of three. I'm starting to believe it. I didn’t plan on being an idiot, it just happened. There may have been more but here are three good ones from the weekend:

1: Do you have a business card? 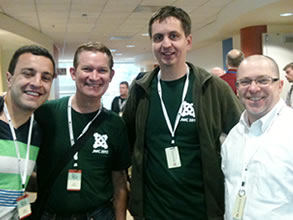 On Thursday afternoon I arrived at the hotel where a lot of the people from the conference were staying. I joined a group of people that were standing around and talking. A few minutes later a really tall guy walks over, looks me right in the face and says, “Hi Joe”. I said hello back and continued with the group conversation. The tall guy wandered off a couple of minutes later. He seemed a bit shy and didn’t join in the conversation.

The next morning while everyone was waiting for the sessions to start the same tall guy walks right up to me and says, “Hi Joe, I’m Steve”. I said hello and we started talking. I asked how his journey to the conference went and other superficial things that you say when you are meeting somone for the first time. About 5 minutes into the conversation I asked him if he had a business card. He gave me a funny look and then took one out of his wallet and handed it to me. It was an OSTraining card with the name “Steve Burge” on it. I looked at the card and asked him, “Why are you handing out Steve Burge’s business card?” He replied, “I’m Steve Burge”.

I was so embarrassed. I couldn’t believe I didn’t recognize Steve. I’ve talked to Steve on the phone, texted with him on Skype, and been hired by him to do OSTraining in Toronto. Then I fumbled and said he didn’t look like his picture. Apparently a lot of people made the same comment to Steve during the conference and I noticed his Twitter picture has been changed since then from the one he’s used for so long.

2: At least I didn’t ask this guy for his card 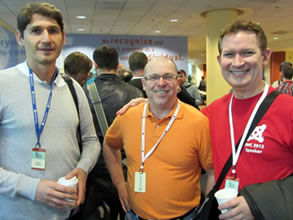 Friday morning was registration. A lot of people were lining up at the entrance to get their security badges. I had mine and was now huddled in the middle of a large group of people. Suddenly someone yelled out, “Hey Joe!” I turned toward the sound. It came from about 15 feet away. Right by the front door entrance was the guy who yelled it. I didn’t recognize the face. He was looking right at me, and still I turned around to see who the Joe was he was hollering to. No one responded to him.

Sometime later this very same guy came up to me and said “Joe!” I still didn’t know who he was until he said, “I’m Rod Martin!” I couldn’t believe it. I’ve met Rod no less than three times in person before. He’s the guy who handed off the JoomlaTraining classes in Toronto to me for OSTraining.

3: I’m already feeling dumb for not recognizing people
that I should know

One one of the days during lunch I was sitting in the main room with Alan Langford and Ian MacLennan who are both from Canada. Behind me was this really nice guy with reddish hair who was talking to us. We had been talking together for about 40 minutes. Then I opened my program to see what sessions were coming up. I happened to flip to a page that had a picture of the guy who was sitting behind me. So that’s what Sam Moffatt looks like. Duh. Sam Moffat and Ian MacLennan are both on the Production Leadership Team. I have seen Sam's picture all over the Joomla! community and have used his extensions for Joomla! for years.

Lots of great information at JWC12 but even more laughter

One of the my favourite things about going to these big events is the laughter. Some of the most talented people in Joomla! are also the funniest people I know. I met Eddie Tabush, the owner of Joomlashack, at JoomlaDay Chicago earlier this year and here again at JWC12. Eddie could have another career as a professional comedian. In Chicago he had me laughing so hard that I was literally crying. Here at JWC12 he was at it again telling his stories and I loved every minute of it. Eddie’s sense of comic timing is amazing. You simply have to hear him when he gets going. There are other people who tell great stories that make you laugh but Eddie is the guy who makes me laugh the hardest.

I could go on for hours about all the fun. Jump in and tell some of your stories in the comments below about Joomla! World Conference 2012.

I’m already looking forward to the next big Joomla! event.